A group of ITMO University engineers are testing a new air conditioning system as part of an R&D project. The system would provide a more cost-efficient way of regulating the air temperature and humidity within buildings compared to existing counterparts. Its design removes the need for a complete replacement of the ventilation system, and, because it requires no outside equipment to be installed, can also be used for buildings of historical importance. A writer for ITMO.NEWS was present during a testing stage and learned how the new system can reduce energy spending by up to 80%. 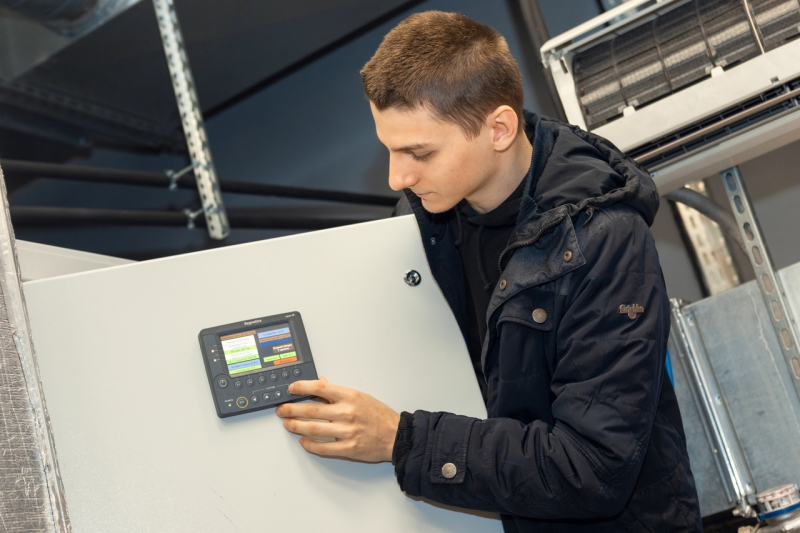 A small room on the ground floor of ITMO University’s Lomonosova Street campus houses one of the most vital yet barely noticeable technical facilities in the building: the input and output of the air conditioning system. Every day, outside air is pumped via a rectangular duct into the building to ensure the comfort of students and staff, while another duct expels the “used up” air onto the street along with extra humidity, carbon dioxide, and bacteria.

And though the time is long past midnight, the staff of the Faculty of Cryogenic Engineering – inventor Sergei Muraveinikov’s team – are hard at work. Several months ago, they’ve installed a new air conditioning system of their own design in order to test it and create a prototype they could eventually turn into an actual market-ready product.

“We’re working to improve the cost-efficiency of air conditioning systems,” explains Sergei Muraveinikov. “In order to do that, we’ve created a system that utilizes the warmth of exhaust air. Regardless of the temperature outside, we can “extract” heat from the air being expelled onto the street and transfer it to the air that’s being pumped inside. That process requires very little energy while providing quite a bit of heat. That’s during wintertime; in the summer, the system works the other way around.”

The room is chilly, and the engineers are wearing their jackets. Yet this is the rare case when people are happy to feel cold, as they’ve been eagerly expecting it. This is because the system that’s been developed by the engineers is able, according to their calculations, to regulate indoor air temperature without additional heat-transfer mediums at -5 degrees Celsius (the system will still function at a lower temperature, but it will need to draw additional heat from the central heating system). Unfortunately, this year’s unusually warm winter has prevented them from testing this hypothesis. Earlier that day, the weather forecast promised that the air temperature would drop to -8 Celsius after midnight, which is why today the engineers are working at night.

“We’re trying to “catch” the right temperature in order to tune the amounts of cooling agent and freon gas to the optimal level. The entire system is very sensitive to these and other parameters, and since we’re trying to optimize everything and achieve the best performance, it’s very important for us to do this,” explains Muraveinikov.

The building’s ventilation ducts are adorned with cables and sensors. One computer cannot handle all of the data, which is why the researchers are using two laptops simultaneously to record all the sensor readings.

A glance at the system makes it clear just how compact the engineers’ solution is. In essence, the entire system is contained within just three moderately sized boxes: one heat exchange unit on the input pipe, one on the output, and a control module nearby, all connected by small tubes through which the heat agent flows.

“Our system uses a well-known solution with a non-standard approach,” explains Sergei Muraveinikov. “Many systems use the air that’s already in the room to heat the air that’s being pumped into the room. This is done using heat exchange apparatuses, rotor-based ones being the most efficient. The exhaust air, which let’s say has a temperature of +22 Celsius, contacts the rotor and heats it up; then, the rotor comes into contact with outside air, which might be -22 Celsius. But there is a drawback: the direct contact between the two air streams means that there’s no way to get rid of smells, pollution, or bacteria. This imposes a number of limitations, and AC systems of this kind are often forbidden from being used in certain types of buildings. The rotors are also quite massive, and cannot simply be added onto an existing ventilation system. Meanwhile, regular AC systems consume a great deal of energy – sometimes up to 60% of all power consumption in the building.”

This team has taken a different approach to the issue by utilizing a system similar to that of a regular fridge. The heat exchangers are installed within the ventilation ducts and connected to a control unit. In the summer, hot air from the outside is pumped into the module where it cools down, thus transferring the heat to the heat agent (in this case, regular water that’s being cycled through small tubes). Then, the water goes into an evaporator and the heat transfers to a condensator on the output tube via a freon loop. In the winter, the process is reversed.

When the air temperature is finally cold enough, the engineers have finally been able to collect the data they need to adjust the system for moderately cold temperatures. Now, they’ll need to process this data to provide the proper calculations to their potential clients. Then, they’ll need to carry out more tests in order to acquire accurate stats on the system’s cost-saving abilities. Current estimates predict a yearly reduction of almost 80%.

Most importantly, the system can be used in historical buildings, as it doesn’t require any massive external equipment that would otherwise tarnish the facades.

“Our city abounds with buildings of historical significance; in the city center, installing an AC unit is a challenge. Our system is completely internal. We can provide comfort where nobody else can,” say the engineers.

Next morning, their work will continue – and it will go on and on until the prototype is market-ready. In fact, Sergei Muraveinikov already has some experience in marketing his inventions: he has successfully begun the production of an air dehumidification system that he developed as part of his Master’s thesis.

The inventor and his team are also collecting data regarding the changes in the quality of indoor air; this information is needed for their other project.

“AC systems easily adapt to external changes, but aren’t that great at identifying the needs of individual areas within a building. Adaptive climate control is yet another important step towards energy self-sufficiency of buildings, and there are no technologies so far that would make it possible. We’re working on a completely new approach to solving this issue,” says Sergei on his team’s plans for the future.