ITMO University graduate Ilya Chekh was named “Entrepreneur of the Year” in Russia by a prominent international audit and consulting company Ernst & Young (EY). Founded six years ago, Ilya’s company Motorica annually provides over 500 people with modern biotic limb prostheses and is gearing up to enter the Asian market. ITMO.NEWS reached out to the entrepreneur to find out what yielded them this prestigious award and how people’s perceptions of prostheses have changed over recent years. 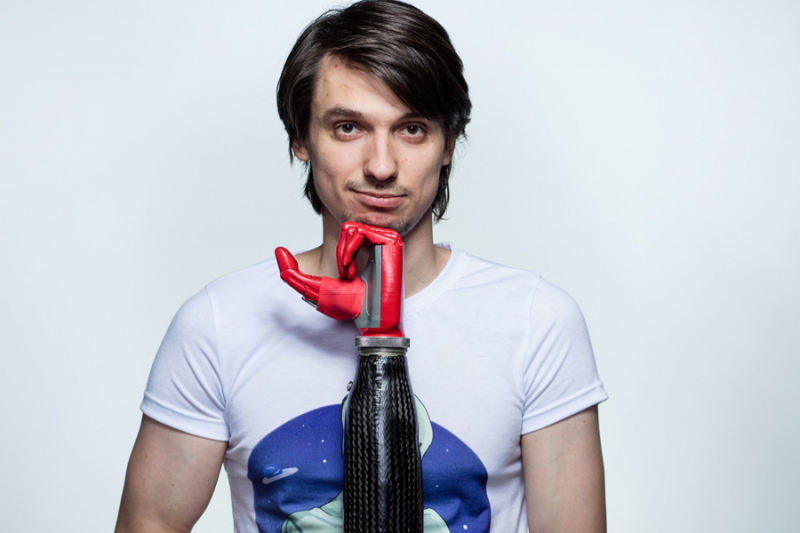 Every year, London-based international company Ernst & Young gives out awards to entrepreneurs in different countries, recognizing the most promising innovations in different market fields. Following that, an Entrepreneur of the Year is chosen out of different nominations’ winners, who then represents their country at the international round of the EY Entrepreneur Of the Year Awards. A total of 64 business people from 61 companies have participated in the Russian round of the competition.

The initial selection of finalists was conducted on the basis of the applications they had submitted. After three successful candidates were chosen in each nomination, they were invited to participate in an interview.

“There were no strict selection criteria that would determine your win,” says Ilya Chekh. “During the interview, we were asked all sorts of things: our business structure, revenue and development plans. A lot of attention was paid to corporate culture: what a company lives and breathes with, what ideas and mission it has. For us, this is transforming our field, the very approach to prosthetics. What we’re making is not just “grabbers” but a new product that should, in the long run, surpass the possibilities of a real hand and transform people with disabilities into people with expanded abilities. To achieve this, prostheses’ functionality should be extended to that of gadgets.”

Winning the competition became a belated present for Chekh’s birthday anniversary: the ITMO alum turned 30 this year. During this time, he was part of a team that developed the first private lunar rover and worked as a design engineer. Closer to the mid-2010s, he turned his attention to the field of prostheses. The EY award provided Ilya with yet another opportunity to attract media’s attention to the developments in bionic prosthetics, as well as contacts with potential partners and enhanced prospects of entering international markets.

“Any undertaking should be for the greater good”

What led Ilya to the field of prosthetics was his interest in robotics and desire to make things that could be of real and tangible benefit to people and change their lives for the better.

“Any undertaking should be for the greater good – I have no interest in doing something just for entertainment’s sake. We want to make things that more hi-tech than just amusement robots; it’s more interesting even from the technological point of view. The hardest aspect of prosthetics is the interface, the human-machine interaction,” explains Ilya Chekh.

Today’s bionic prostheses are very different from the devices that were widespread 15-25 years ago. Before, even the most technologically advanced devices only had two programs: “clasp” and “unclasp”. Now, the sensors reads the muscle impulse from the phantom gesture and tries to perform a more complex grip, depending on the specific object.

What changed wasn’t only the technical requirements to the prostheses but also society’s perception of a person with bionic hand. Now, prostheses aren’t hidden away or masked in a silicon casing, all the more so because it decreases the device’s functionality by weakening its grip and reliability.

“The trend has now been reversed: people, especially young people, want their prosthesis to single them out in a crowd. A prosthesis in general has a colossal impact, we keep in touch with each and every of our clients and notice that getting a prosthesis radically alters the way they view themselves. One young woman for a long time had refused to use a prosthesis, but getting one helped her find herself, now she is a model featured in top fashion magazines,” says Ilya Chekh.

The components for Motorica prostheses are commissioned by the company from their contractors, but each device is assembled with its specific future owner in mind. While the prostheses are more or less similar in terms of their technology, their design usually ranges from model to model.

“Some customers want their prostheses to have cartoon pictures on them, some want them black, neon green or pink. The most interesting order was for a prosthesis inspired by the Infinity Gauntlet. We took the pains of incorporating Infinity Stones into the structure, colored it, and the result was just on fire. We try to ensure that each customer would get their prosthesis from the hands of the specialist who assembled it, especially for children’s models. So that every assembler could see who they work for, get to know their client.”

Today, Motorica is preparing for the release of new models of adult robotic prostheses with the mobility of each finger. The company also gears up to launch the production of elbow modules, which will enable them to assemble prostheses for people with amputated arms. Next year, work will also begin on a new generation of prostheses.

“Our main task is to make a prosthesis as intuitive as possible so that it itself could understand what it grips and how it should grip it. There are lots of nuances involved; there are many variations of how this goal can be achieved. We’ll be testing two of these technologies: one resembles echolocation, another video recognition. This will enable the comfort of daily use so that a person would be able to handle day-to-day objects in a faster and more convenient way. This work is planned for 2020, and should enter serial production in 2021.”

Apart from that, Motorica also aims for promoting their products on the international market and expanding the geography of their sales. Talks are being held with potential partners in India, and the company also plans to obtain European quality certificates.

“In Russia, we have now almost reached the ceiling in terms of customer search and development: we have a limited market of about 20,000 people. Not all of them want prostheses, and not all of them are prescribed to. The real demand amounts to five or six thousand prostheses. Many people get used to living without a prosthesis if they haven’t used one since childhood, and they don’t see the point of one, thus neglecting the physical and psychological health. To explain why prosthesis isn’t simply a beautified “grabber” is our main challenge in terms of attracting customers.”

Asked how the field could change in the next 10-15 years, Ilya Chekh responds that in his view the possibilities of a bionic hand won’t be that much different from a human hand.

“I think that what we’ll see is a sentient prosthesis capable of transmitting to its owner’s nervous system all the information on what it gets hold of, how it gets hold of it, the management will be more intuitive. The developments will enable small motorics, even with specific fingers. It’s possible that one would be even able to play the piano, though it’s more likely that the prosthesis will itself decide with which fingers to press the keys with,” concludes Ilya.