Mariia Plotkina, a founder of Geek Teachers, became the winner of the International Young Female Entrepreneur of the Year Competition and received a $5,000 reward to develop her startup for training school teachers in new technologies. 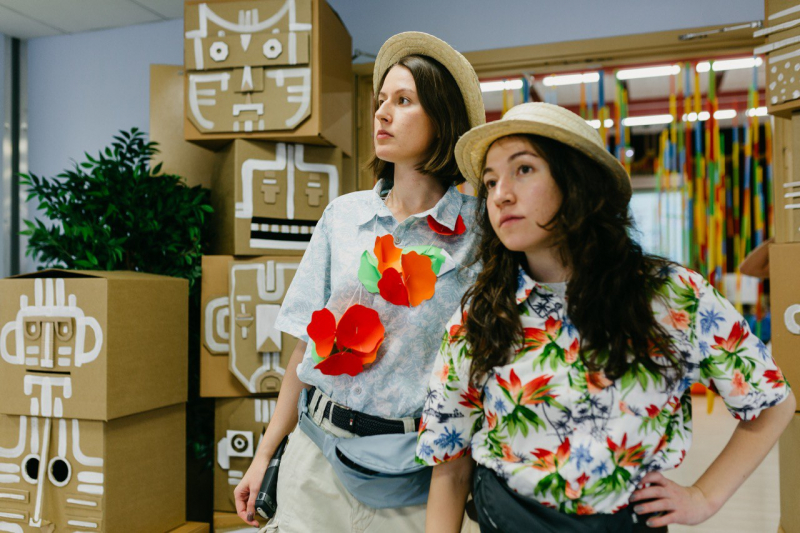 Mariia Plotkina and Arina Nuriakhmetova. Photo courtesy of the subject

The Geek Teachers project, created by Mariia Plotkina, a graduate of ITMO’s Faculty of Precision Mechanics and Technology, and Arina Nuriakhmetova, is aimed at educating teachers. It includes online courses, as well as educational and entertainment festivals that help teachers use information technology in their classes and feel motivated in their work.

ITMO.NEWS has already met with Mariia Plotkina and talked about her path in entrepreneurship, her project, and what inspired her to launch a startup. However, since then, the startup team has reached a new milestone – the Young Female Entrepreneur of the Year Award.

About the Young Female Entrepreneur of the Year Award

The competition was part of the Youth Business Europe program. Since 2015, it has been supporting young entrepreneurs by providing them with skills training, mentoring, and access to low-interest loans. The initiative is the result of Youth Business International and the Citi Foundation’s collaboration. The program’s participants include 11 organizations from ten countries, including Youth Business Russia.

The Young Female Entrepreneur of the Year competition was set up to recognize the role of women in business. Each member of the program nominated one remarkable female entrepreneur aged between 18-35 who has received support to start or grow their business. Mariia and ten other young women entrepreneurs across Europe took part in the competition.

“It’s been a long path. It all started with Impact Hub Moscow’s accelerator program called 90 Days Challenge. Our win in the KIVO Education Innovation Competition helped us enter the program. For 90 days of the accelerator, we successfully completed the tasks, and in the final, we won the Internet for a Better World nomination by Rostelecom and got the opportunity to attend an international summit. Thanks to our excellent results, the organizers nominated us for the Young Female Entrepreneur of the Year competition. Without this chain of events, our participation would not have happened,” she says.

Participants had to fill out an application, pass the first country-level round, make a presentation about their project, make a video with a short pitch, and also answer questions from the organizers about the startup plans, the challenges of 2020, and the importance of a woman entrepreneur role model in the world.

At the final event of the competition, participants and organizers learned more about the businesses of the finalists, discussed with leading experts the structural barriers women face in starting, maintaining, and growing a business, and also talked about the impact of Youth Business Europe on addressing gender inequality in entrepreneurship. The competition was followed by an award ceremony.

Taught to go online before it became mainstream

“Everything that we have experienced during our two and a half years’ work on the project helped us to get this award. We won because we worked hard. Among other things, we were supported by the organizers, who saw our potential to go international. This is true, obviously, not for all startups,” Mariia comments on the victory.

Mariia is confident that the relevance of online education and the support of teachers who use information technology helped their startup to receive the reward.

“At first glance, it may seem that we are just talking about apps, but in fact, we are building a community of teachers who teach awesome classes and are committed to their schools. We help them avoid burnout,” says the project’s founder.

The jury also appreciated the project’s timeliness, because it is aimed at switching to online education without losing the quality of education, which is a pressing issue nowadays. They were also interested in an unusual approach – holding fests for teachers – as well as in the fact that it was invented and implemented by two young women who did not give up because of all challenges existing in entrepreneurship for women.

“Any competition is an opportunity to present your accomplishments. Being active in the media is essential for every business and startup. We also got the opportunity to receive consultations and support from international business experts,” says Mariia about the advantages of victory. “For me, recognition at the competition is another milestone that motivates me and gives me the desire to work at times when it’s hard to find strength.”

With the help of the prize, the startup team plans to go international. According to Mariia, the winnings will go to the organization of the International Geek Teachers Festival in offline or online format.

“We can’t say that the competition is a turning point after which we suddenly started to do something. We had plans before, for example, to develop an online geek school with our courses. We are going to hold even more festivals and expand them. We would like to have representatives in different Russian cities. I would like to create a show about teachers for teachers and, in general, be even more active in the media, namely enter new platforms such as YouTube and TikTok. The international competition will allow us to get more coverage and support because now we are in a community of women entrepreneurs from all over the world,” she concludes.