A group of researchers from ITMO’s Faculty of Infocommunication Technologies is conducting experiments on creating holograms of underwater objects. The first stage of the experiment, which involves taking high-resolution pictures of people moving underwater, took place at a swimming pool outside of St. Petersburg. Andrey Karmanov, the head of the project and an associate professor, told ITMO.NEWS about the challenges of creating holograms of underwater objects and the possible effect the project will have on robotics. 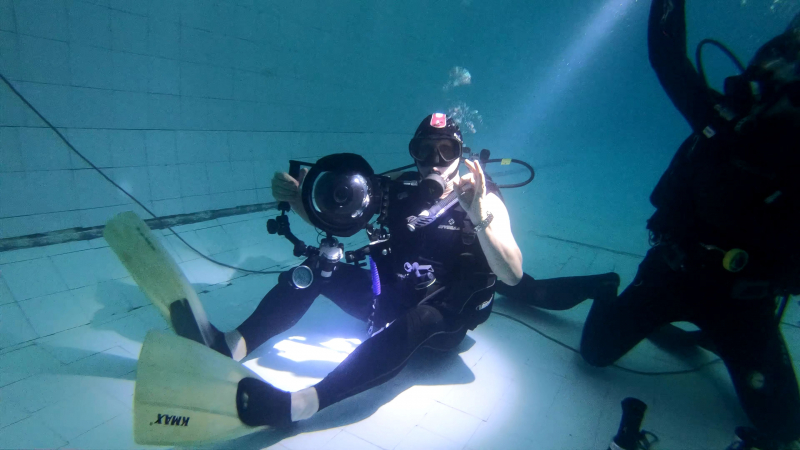 On February 2, a swimming pool in Gatchina served as a springboard of sorts for a group of researchers creating multiplex holographic images of underwater objects. The experiment required high-resolution underwater images to be taken in two axis systems in order to capture the object from every angle.

“We’ve conducted our experiment at a depth of five meters,” explains Andrey Karmanov. “This part of the experiment required a group of at least five experienced professional divers who could communicate non-verbally. Second, we needed diving equipment, underwater lighting devices and special filming equipment. After we’d marked the object and secured it within angular coordinates, we proceeded to shoot multiple series of images – three images from every angle. When you work with objects located on the ground and use a drone to get your images, you can simply program it to maintain a certain trajectory along each of the three axis. With an underwater robot, you have to go underwater and take pictures yourself to teach it how to do it. After getting the first results in semi-automatic mode, you get the hang of programming a drone for underwater activities.”

The associate professor had to spend nearly two hours at the bottom of a five-meter swimming pool to get the initial results. All the while, he was taking pictures not of a still object, but of a moving person in a diving suit. The test hologram is expected to be finished within the first half of 2020.

This project could be applied in engineering, namely in AI-based optoelectronic identification systems.

Moreover, underwater holograms can be used to create accurate models of underwater objects, such as marine wildlife, sunken ships and artifacts. They could also come in handy for monitoring environmental changes or in various art projects.

“Just imagine seeing a “living” fish behind the glass, a fish that lives deep under the sea. You would actually have a fish tank but without the worries of cleaning it and feeding the fish,” continues Karmanov.

According to Professor Karmanov, underwater hologram experiments are only one part of a major project on autonomous underwater devices, which could be used for environmental monitoring, underwater shoots, searches and positioning.

“Our research group is starting a sequence of experiments on underwater technological operations. Their primary aim is to expand the capabilities of underwater robotic systems by using AI. It has to be taught how to process heterogeneous information in order to reach a new performance level. We use an interdisciplinary approach when developing multi-platform technologies. Apart from underwater holograms, our group is going to be setting up and equipping a robotic submarine soon to enter its testing stage,” adds Karmanov.

The unmanned underwater system will be able to reach the speed of five knots, submerge to the depth of sixty meters and scan the area around it at the speed of two knots. It will be capable of about 4 hours of autonomous performance.