The event took place as part of a project that aims to facilitate the development of the Baltic region in four fields: smart city, circular economy, climate change, and aging. 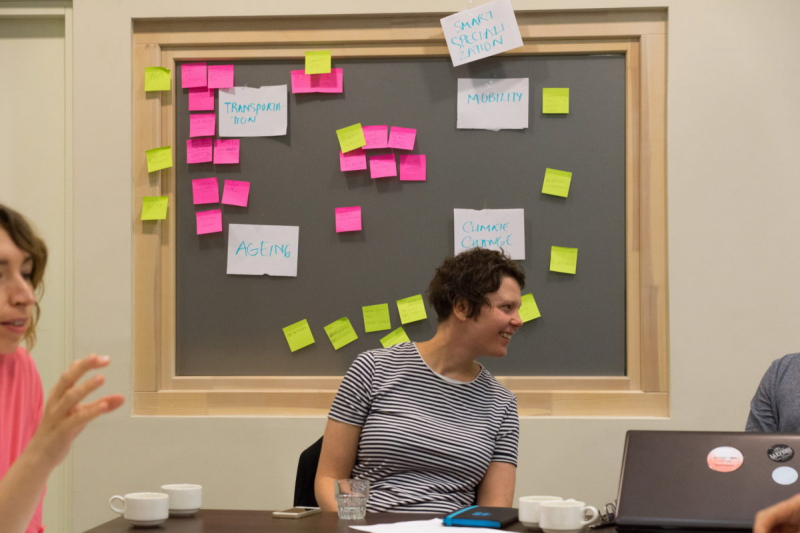 The ITMO-hosted camp was the final event of the three-year Smart-Up BSR project, which is funded by the Interreg Baltic Sea Region Programme 2014-2020 with financial support of the Russian Federation. ITMO University organized and hosted the innovation camp in collaboration with Aalto University, the project’s leading partner, as well as with the support of representatives of urban municipalities, members of the Baltic region’s innovative infrastructure, and the region’s leading universities.

The innovation camp was held biannually for three years at key locations in the region: Tallinn, Helsinki, Aarhus, Gdansk, and Riga. Each of the partners was able to pick specific areas of focus and provide participants with cases that were relevant for each particular region.

St. Petersburg and ITMO University were to be the project’s final location, but the pandemic resulted in the event being moved online. But, the organizers explain, it only helped test the innovation camp’s methodology in a virtual environment and prepare the foundation for future events in this format.

“Offline, our work process usually revolves around brainstorming. This time around, we used the Miro software and special approaches developed by our facilitators; it combines design thinking methods and problem-focused methods. To help the participants become immersed in the subject matter, we prepared videos and presentations to provide them with inspiration. What also helped was that our team included those who had already participated in previous events and know each other personally,” says Svetlana Bazueva, head of the International Programs and Projects Office and head coordinator of Smart-Up Innovation Camp St. Petersburg.

Participants were given the choice of three cases: ITMO Highpark as an innovative regional object, postindustrial creative spaces as St. Petersburg’s development driver, and the development of a smart city data platform. All cases were provided by the event’s stakeholders. The Highpark case was presented by Aleksandr Gostev, deputy head of the Event Management Office at ITMO, and Olesya Baranyuk, deputy head of the ITMO Technopark.

More than 40 participants were involved in the two-day intensive course: ITMO students, representatives of universities in Klaipėda, Aalto, and Gdansk, as well as representatives of the governments of Tallinn and Aarhus, the Latvian Ministry of Economics, and the Lithuanian Agency for Science, Innovation and Technology.

ITMO.NEWS spoke to some of the camp’s participants and stakeholders to find out how relevant for the Baltic region are the issues presented within the cases, which solutions have been found, and whether they’ll see practical implementation.

Deputy head of the ITMO Technopark

As part of this fall’s innovation camp, teams made up of international and Russian experts developed complex solutions to three cases related to the issues of St. Petersburg’s innovative development. Naturally, in this context the ITMO Highpark project, being a growth driver for ITMO University and the region in general, was of the most interest to the experts. It was important for us to not only get answers to the questions posed, but to make a name for ourselves, as well. After all, the Smart-Up BSR project counts representatives of universities and institutions from more than six countries among its participants, and this was our chance to tell them all about our ambitious initiative – and that’s the first step towards increasing our visibility in the international innovation community.

We, too, learned many useful things. For instance, our Estonian colleague Kristi Joeaar shared with us the development history of the Tallinn Science Park Tehnopol, highlighting the importance of communication and noting that it’s vital to not only attract the interest of scientists and entrepreneurs, but to teach them to work together, as well. At Tehnopol, as funny as that might sound, the solution laid with ice cream. Every Thursday, the main coworking space welcomes all members of the local ecosystem to eat some ice cream and meet the new residents in an informal environment (in wintertime, the ice cream is substituted for pancakes).

I was invited to take part and join one of the teams. I picked the Highpark challenge seeing as it’s directly related to ITMO University and I’ve long been interested in learning more about the project: what’s already done, what isn’t, and what is yet to be done.

We were introduced to the case and currently available materials and were then asked to think how to best attract residents and companies to Highpark. Ours was an international team, which allowed us to consider the case from the perspective of Russian companies as well as Finnish ones, represented by Tuija Heikura, who provided us with great feedback and explained the work process of Aalto University’s technology park.

The switch to online had no effect on the event’s quality; we were able to accomplish our goals efficiently thanks to Zoom and Miro. It was quite “crowded” with some 30 to 40 participants always being online. There were many people at the presentations, too, which was pleasant. I was especially glad that the international participants, too, were actively involved.

I would very much like to see the results of our research taken into account. I think we’ve produced several very good ideas that I believe the Highpark project’s administration would be interested to hear about. Our key suggestion was to establish a Highpark-centric community before the actual venue opens its doors. To that end, we propose creating a physical and virtual platform where the future residents would be able to communicate, as well as finding enthusiasts willing to promote ITMO Highpark, curate the community, and respond to questions.

We’ve also thought that, perhaps, the future residents would like to have access to all sorts of government services while in Yuzhny (a satellite city in the Pushkinsky District of St. Petersburg and future home to ITMO Highpark – Ed.) – and in one place, to boot. We believe it would be possible for Highpark to host the representatives of key government services.

Our colleague from a technopark in Klaipėda shared her experience of attracting residents through the establishment of a cultural environment. By which I mean that, in addition to work, people also come there for leisure. Every week, there are concerts and events there, which allows people to spend quality time at the technopark and socialize.

I chose to take part in the camp because I am a partner in the Smart-Up project and I enjoy learning about new co-creation methods and coming up with solutions to local and cross-BSR challenges. I work in an innovation department in the City of Aarhus, where many of the projects we focus on are within the Smart City domain, and therefore case #1 was the one where I could best apply my expertise.

One of the solutions that our group presented at the camp was a Smart City Chatbot. The idea was to collect the best practices, products, and services from smart city marketplaces, and then present that information via an international chatbot solution. This way, we’ve got a single entry point to share and validate smart city solutions.

The method used in the camp was centered around design thinking, but because of COVID-19 the design process was facilitated via an online platform called Miro. The structure of the templates used in Miro was really good and ensured a good flow given the short time frame that was available. I think the level of ideas we ended up generating was good, but it is always better to meet physically and have more time dedicated towards understanding the challenge and generating a more detailed solution.

In essence, the innovation camp format entails a search for innovative solutions; and an “ideal” smart city is all about innovation. Besides, this subject intersects greatly with the idea of a green economy, which was the focus of other camps that took place as part of this project. ITMO is one of the developers of the Smart St. Petersburg concept; the university helped introduce the project and organized (and probably will in the future) the sessions of the aforementioned initiative’s project office.

St. Petersburg continues the development of this project; the next iteration was to begin in April 2020, but was postponed for pandemic-related reasons. In the Baltic region, there are plenty of smart city projects being implemented: among the most successful are those in Helsinki, Tallinn, and Hamburg, the representatives of which also took part in the camp. In addition, Smart St. Petersburg has signed partnership agreements with Tampere and Dortmund, whose visions and concepts are very much similar to ours.

Our first suggestion – international relations for experience exchange – is, as I’ve said, already being implemented for the most part. Namely, there are smart-city projects in St. Petersburg that have connections to major Finnish, Swedish, and German companies. This is as far as projects are concerned; as far as exchange of experience, there are also joint sessions (with Dortmund, for example) and “expedition” tours (for instance, the representatives of the Smart St. Petersburg project office had visited Tampere as part of a smart solution tour). As for exchange of knowledge, ITMO University actively works with universities in Aalto (Finland), Riga (Latvia), Karlsruhe (Germany), and Aarhus (Denmark), namely on issues of smart and green environments.

The Institute of Design & Urban Studies has a database of smart-city projects. An interesting solution would be to convert it into a bot, perhaps as part of a student project. But to take such a bot to the international level, in my opinion, we would first need to create the necessary community.

PhD, lecturer at the University of Gdansk (Poland)

I participated in the camp in Gdansk in 2019 and it was a fruitful event in terms of knowledge and competency development. I also established new contacts and had hoped to meet them again.  I choose case #2 because it relates to my academic research on urban development, circular economy, and city regeneration.

Our solution was to recommend public discussions that would enable synergy between creative clusters, city administrations, and all potential visitors. We also suggested putting an emphasis on the younger audience, which not only has influence over their parents, but is in itself the future social capital of our cities, as well as providing more representation for clusters in the digital environment and making creative spaces more accessible – including in terms of transportation.

Teamwork was well organized and moderated, but it seemed to me that it was more difficult to keep everyone engaged than it was during those in-person sessions in Gdansk. I must admit that I would probably have not joined the event if it had taken place in St. Petersburg, so the virtual camp was a blessing for me.