A series of workshops on creating a comfortable territorial ecosystem of ITMO Highpark has recently kicked off in St. Petersburg. The first workshop brought together students of three St. Petersburg’s universities – ITMO University, St. Petersburg State University of Architecture and Civil Engineering, and International Banking Institute, who discussed the project of ITMO Highpark’s future dormitory building in the brainstorming format. In the course of two days, the students had to come up with solutions that would facilitate the implementation of the project and reduce its cost. Young architects, engineers and economists presented their ideas, some of which can potentially reduce the cost of the project by several million rubles. 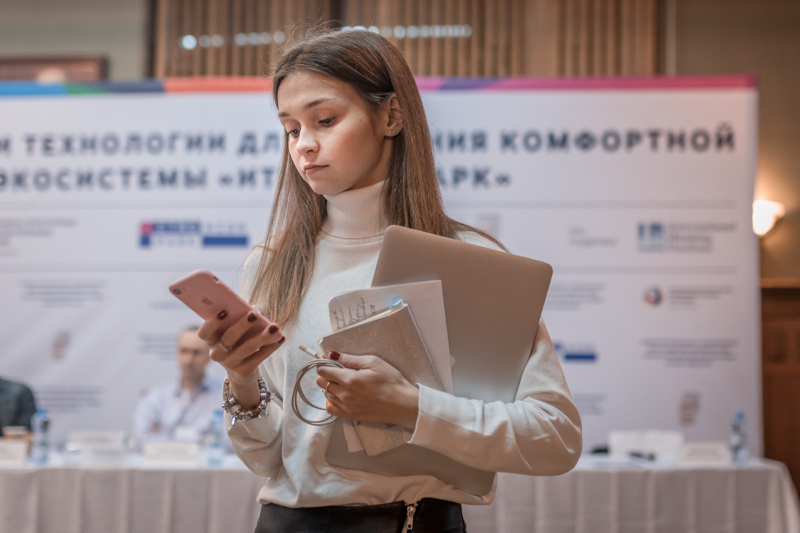 How to make a new university campus be built from the most modern and eco-friendly materials? How to prevent raindrops from breaking down roads circumventing the building, and making them adorn the campus’s territory instead? Usually, students can’t influence these decisions, but not in ITMO Highpark project. ITMO students can participate in special workshops with discussions on the new campus’s building drafts, suggest their ideas, and give feedback.

The first such workshop was held this week at the International Banking Institute’s (IBI) Boiling Point space. Together with their colleagues from St. Petersburg State University of Architecture and Civil Engineering (SPbGASU) and the IBI, over the course of two days, ITMO University students brainstormed the topic of which innovations can be introduced during the construction process of the ITMO Highpark campus.

All the students worked in one team, however, each group was responsible for one particular area: for example, some students attempted to find out what new materials could potentially be used for the building, while others were responsible for landscaping and making the project more economically efficient.

“The students proposed such innovations as the modification of concrete with carbon fulleroid nanomaterial, self-compacting concrete mixes, fiber concrete floor for public spaces on a soundproof polystyrene foam interlayer and others. According to the participants’ calculations, only the use of fiber-reinforced concrete via reducing the thickness of reinforced concrete structures can save about 100 rubles per cubic meter. Applied to the entire dormitory building, this will give about four million rubles of savings,” says Andrey Khomenko, a mentor of the workshop and chief project engineer at the Vertical company.

However, reducing construction cost wasn’t the only task the students were presented with. They also managed to establish that the use of Silver-Nano anti-vandal paint for interior decoration would make it last longer, while the use of energy-efficient windows and the Smart Home system would allow to save electricity and reduce other utility costs.

“Among the innovative solutions proposed was using the aerated ceramic technology developed at SPbGASU’s Department of Technology of Building Materials and Metrology. This involves light heat- and sound-insulating non-combustible plates and blocks with simultaneously high-strength properties. In order to ensure compliance with fire safety requirements and increase weather resistance, the SPbGASU specialists also suggested swapping the wooden facade finish laid out in the initial project plan with fiber cement plates that have wood-like texture and color but differ with the material in their increased durability. In the conditions of flooded St. Petersburg soils, the most important part of the underground parts of the buildings is waterproofing. We have suggested using an innovative waterproofing membrane, the warranty period of which is 100 years, which will significantly reduce the cost of operation and maintenance of the buildings and structures of the ITMO Highpark project,” comments Maxim Kostrikin, a participant of the workshop and PhD student at the St. Petersburg State University of Architecture and Civil Engineering.

The workshop’s participants paid no less attention to the landscaping of the territories adjacent to the new buildings. The students proposed using new-generation pavement coating and the SMART TRACK bicycle roads, which are equipped with special light elements indicating the direction of movement. They also set forth several eco-friendly solutions, such as harnessing rainwater in landscaping design of the adjacent territories and installing energy-saving street lamps.

Also discussed at the workshop was the issue of micro-mobility, that is how easy it is to get to the campus from public transport stops, how fast can one get from one ITMO Highpark building to another and what individual vehicles are easy and convenient to use. Working on this issue was, among others, ITMO University graduate Alina Muratova.

“It has to be taken into account that the campus will be located quite far away from the city and that students may want to access it by their own micro-transport such as boards, foldable bicycles and electric kick scooter. It’s also important to try to forecast which technologies will be used by students in 10-15 years. I suggested creating the infrastructure that would allow for a more convenient use of these means of transportation, such as skateboards storage, as well as charging and parking spots for electric kick scooters, given that only the Ozon online shop has sold has seen a 20-fold increase in their electric kick scooter sales in one year,” shares Alina Muratova.

First in the series

As planned by the organizers, this workshop will become the first in the series of similar events. Such brainstorming sessions are planned for all ITMO Highpark’s buildings.

“This is a big step forward because, unfortunately, it often happens that people don’t want to listen to young specialists. But in this project, the situation is completely different and students can also do their bit,” concludes Alina Muratova.